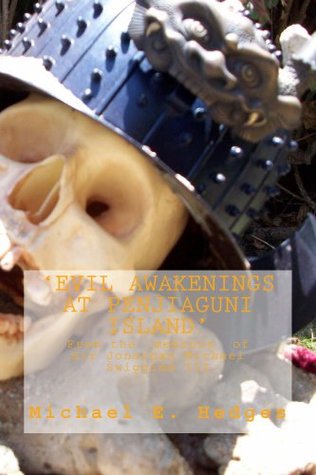 “EVIL AWAKENINGS AT PENJIAGUNI ISLAND”
In the vein of "Magnum PI"

During a vicious attack, a young peasant Samurai is infected by a hideous Alien being’s toxic sting.

Barely surviving the attack, and teetering at the brink of death, Fujisawa is nursed back to health by his childhood sweetheart Sachiko.
His lengthy fever finally breaks, but soon he awakens only to find his uncontrollable obsession for power being driven by the Alien being’s consciousness.

Pillaging and plundering village after village, the treacherous Samurai leader along with his band of misfit Samurai outcasts, terrorized the Japans until their sudden demise during a cataclysmic volcanic event.

Five hundred years later… A three stringed musical instrument, long encapsulated in time, is accidently unearthed from the unchartered, magma encrusted island dunes.
The antiquidated instrument is put up for auction and purchased for the mere sum of seventy-five dollars.

During a friendly struggle between Jonathan Swiggins and his annoying live in nephew Tom Canyon under the bright flashes of a thunder storm, the instrument falls to the floor and breaks apart revealing its secret contents within…
The long lost journal of the evil Samurai Warlord Kage’eTama’s concubine as well as a crudely drawn map.

After some serious soul searching, the aging millionaire views this astonishing find as what very well may be his last opportunity to revitalize his complacent humdrum life…

Unbeknownst to Jonathan Swiggins, undertaking this quest into the unknown will draw him directly into the heart of the Demon’s Lair... A godforsaken and cursed island spoken of only in long forgotten Okinawan campfire stories.

Swiggins subconscious dreams become not of his own as he unwittingly unlocks the portal to the dark side, venturing deeper and deeper into the inner sanctums of the mind’s eye.